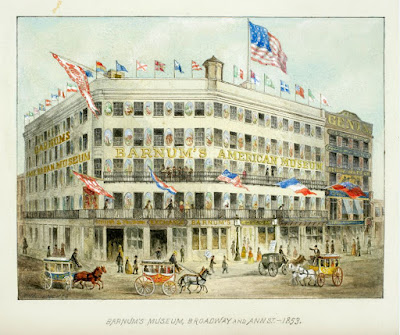 The final two questions in my interview with Barry Schrader are now live. Barry discusses what may be his magnum opus, The Barnum Museum, followed by his take on the current state of synthesizers. There are some tie ins to his previous work on Atlantis as well as Louis and Bebe Barron. "If someone were to ask me what I considered to be my best work, there’s no question in my mind that I would respond that it’s The Barnum Museum. Taken as a whole, this is my longest and most ambitious composition, and one that took me four years to compose. At this time, it remains my last completed work. The idea for The Barnum Museum came from a short story by one of my favorite living authors, Steven Millhauser. Millhauser is a unique writer, and, so, difficult to classify. He’s been compared to such authors as Calvino and Borges, as well as other writers classified as “magical realists,” but I think he’s in a class by himself. The Barnum Museum is a short story in a collection with the same title. I was fortunate to get permission from Millhauser and his agents to base the work on his story. I was especially lucky that Millhauser agreed to a years-long email correspondence about the work: I would send each movement to him as I finished it and he would comment on the work and my ideas behind it. This was invaluable help in my completing the piece. P. T. Barnum established two museums in New York City in the nineteenth century. Barnum's American Museum was on the corner of Broadway and Ann Street from January 1, 1842 to July 13, 1865 when it burned to the ground. Barnum built a second museum soon after, but it was also destroyed by fire in 1868. The attractions made the venue a combination of a zoo, museum, lecture hall, wax museum, theatre, and freak show. At its peak, the museum was open fifteen hours a day and had as many as fifteen thousand visitors daily." Don't miss the full interview question here. You can also go back to the beginning of my interview with Barry Schrader here. And don't forget, Barry Schrader's Soundtrack to Galaxy of Terror is currently available for Pre-Order.
LABELS/MORE: Buchla, Interviews, Soft Synths
Posted by matrix at 7/20/2017 08:00:00 PM
Find it on: eBay | Amazon | MATRIXSYNTH CLASSIFIEDS
Eingestellt von DEGEMNews plus um 20:53